On February 18, 2022, Hurricane Eunice hit England, tearing down on its way trees, power lines and the roof of the O2 Arena.

Record wind speeds were recorded (196 km/h) and property damage amounted to more than 432 million euros according to the ABI (Association of British Insurers).

Although these storms are not as frequent as one might think, they are becoming more and more violent.

For this reason, the development and organization of urban spaces cannot be free of considering the impact of wind for reasons that are primarily related to the users' safety. O2 Arena in London, whose roof was torn off during Hurricane Eunice (source: edition.cnn.com)

Nevertheless, not only category three hurricanes can cause damage. The Tacoma Bridge incident of 1940 in Washington State is one of the best known examples. At the time, the aerodynamic forces (wind action) on the structure were difficult to assess due to the lack of adequate tools during the design phase. As a result, a wind of only 65 km/h is sufficient to set the bridge structure in resonance (a complex physical phenomenon during which a structure vibrates at a high amplitude until it sometimes breaks). 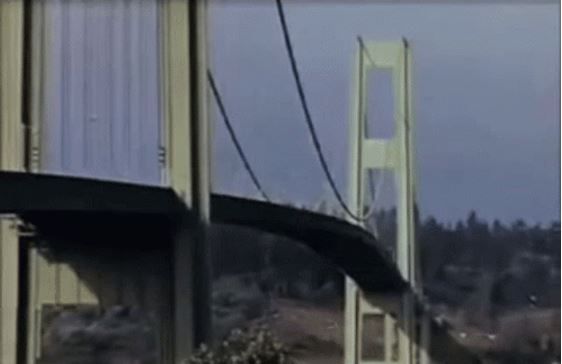 1. The contribution of fluid mechanics

Fortunately, such bad weather does not happen every day, and beyond the purely safety aspect, the impact of the wind constitutes for users a comfort criterion in the same way as the noise level or the sun exposure in a considered area.

However, predicting the flow of a fluid is not an easy thing even experimentally.

This is where Computational Fluid Dynamics (CFD) comes into its own as a practical tool to study the flow around solids and thus participate in their optimization, whether it is to achieve comfort, performance, or safety criteria. One of the advantages of CFD is its flexibility, which allows the comparison of different geometries in a fast and inexpensive way.

In the Netherlands, where strong winds prevail, the brand Senz used CFD to increase the comfort of its users with a design that prevents the umbrella from turning over (source: Actiflow.com)

Several physical quantities can be obtained by simulation, such as the wind speed at any point around the object and the force exerted by the wind on the structure, information that would have been valuable to Tacoma engineers in the 1930s.

2. A concrete case : the multimodal station

The area being rather windy during the year, it is desirable to know in advance the wind speed range near the station for comfort reasons and validity of its location. 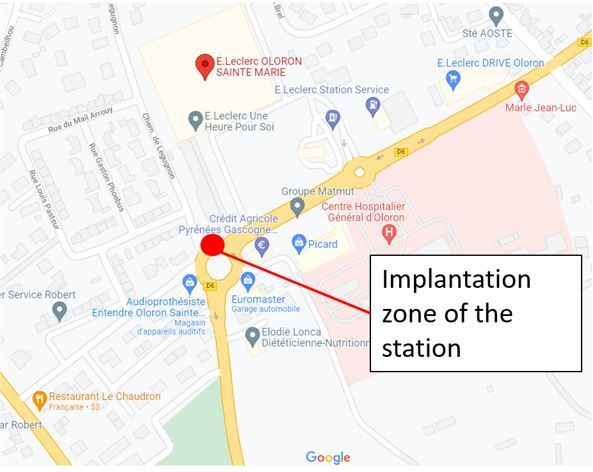 The multimodal station would be in the commercial zone of Oloron

The two parameters of importance in such a study are the layout of the main surrounding buildings, as they can protect the area of interest, and the wind intensity and direction.

This last parameter requires an analysis of meteorological data to simulate the most frequent wind patterns in the area under study. 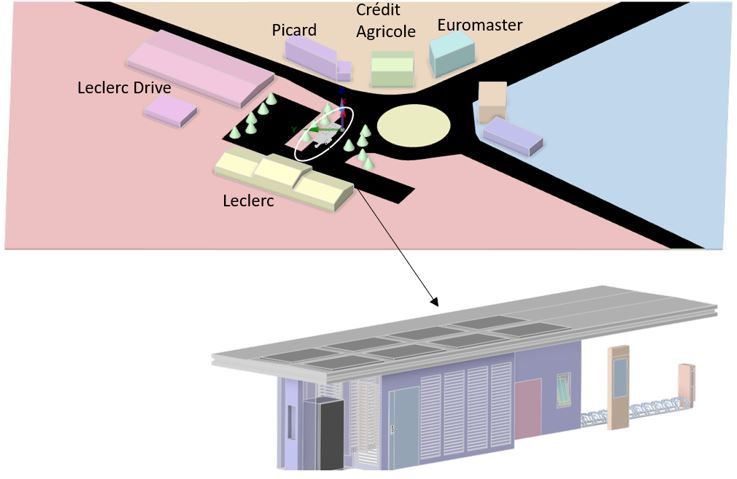 3D geometry of the area of interest that is used to calculate the airflow around the station. The geometry was realized with Spaceclaim software

The geometry delivered by the project architect is reworked to simplify the details that are not relevant for the calculation and to consider the surrounding buildings. Everything is now ready to proceed to the simulation of the flow from the input data.

a. Flow analysis around the station

A first case is simulated, with a wind speed of 17 km/h entering the domain from the West-South-West side (a highly likely wind type during the year).

Wind speed around the station at 1m80 from ground level with a West-Southwest wind. Low speed areas are shown in blue and high speed areas in red.

As expected, velocity analysis at 1m80 from ground level allows to highlight that the structures slow down the wind in their wake. The contribution of the calculation lies in the fact that low air speed zones are clearly identified around each building, which would be very difficult to determine experimentally.

Some speeds observed in the vicinity of the station are high enough to generate discomfort for users, especially inside the shelter itself.

Assuming this does not meet the required comfort criteria, how would it be possible to reduce the effect of wind around the station?

In the following, a solution is proposed, but naturally many others can be imagined. 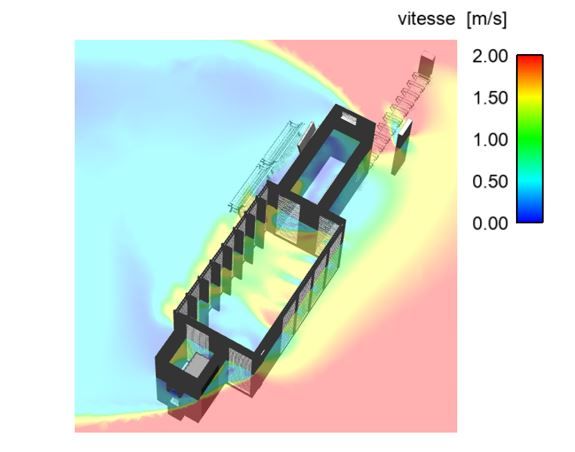 The presence of fins on the station walls allows the reduction of the wind speed inside it.

b. The addition of fir trees around the station

In a second simulation, the wind still blows on the domain at 17 km/h from the west-southwest side, but this time, fir trees have been added around the multimodal station.

Fir trees are characterized by their porosity, i.e., their ability to limit the passage of wind through their branches. In this study, the trees chosen to correspond to the following fir: 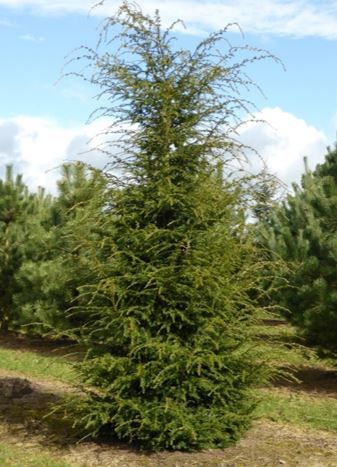 The trees shown in the example have the aerodynamic properties of the tsuga canadensis pine, but CFD versatility allows any tree to be modeled regardless of its shape and properties.

Previous base case gets all its interest because the new results can be compared with the old ones, which makes possible to measure the effect of the trees alone.

The addition of fir trees around the station allows the speed to be slowed down. 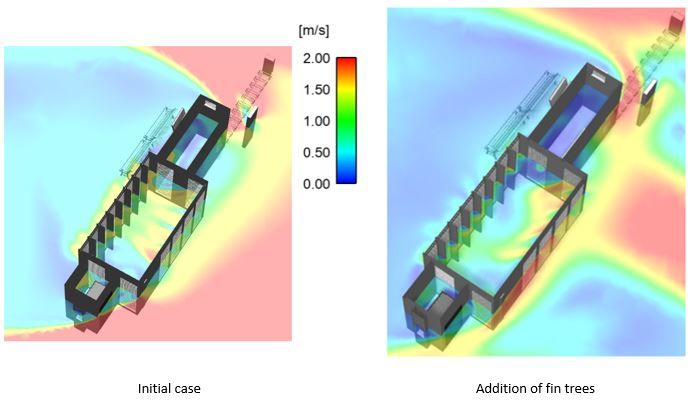 The fir trees influence the wind speed inside the station. Users are better protected.

This time, the addition of the fir trees has reduced the speed around and inside the station as expected. The solution works !

If we wanted to improve it further, a similar study could be considered where the trees layout could be changed, or hedges could replace them to estimate their impact on the comfort of the users.

In a cross-section of the station, wind speed decrease can be seen in the wake of the trees, illustrated by the blue areas (low speeds).

Today, CFD has become an indispensable tool in the field of architecture, especially for large buildings which, because of their large outer surface, are more sensitive to wind. The architect, who often does not have the required skills, will rely on an independent entity to estimate the forces generated on the structure according to different scenarios of probable wind orientation and intensity. If the location is subject to high winds, the architecture must be adapted to minimize the stresses on the structure. Furthermore, high-rise buildings are likely to create vortex shedding phenomena, a set of vortices that can impact other buildings in their wake. And here again, CFD can help predict and mitigate this effect. 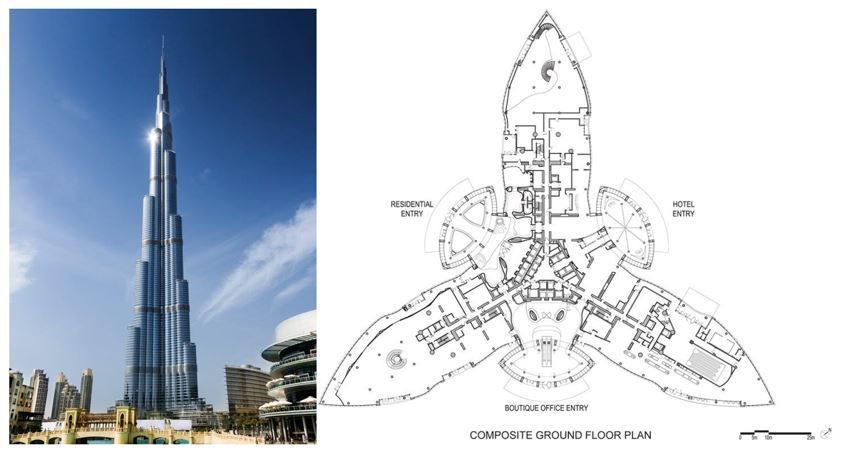 The Burj Khalifa in Dubai has an innovative triangular shape that limits the impact of wind forces regardless of its wind incidence and prevents vortexes from forming at the top (source: pexels.com) 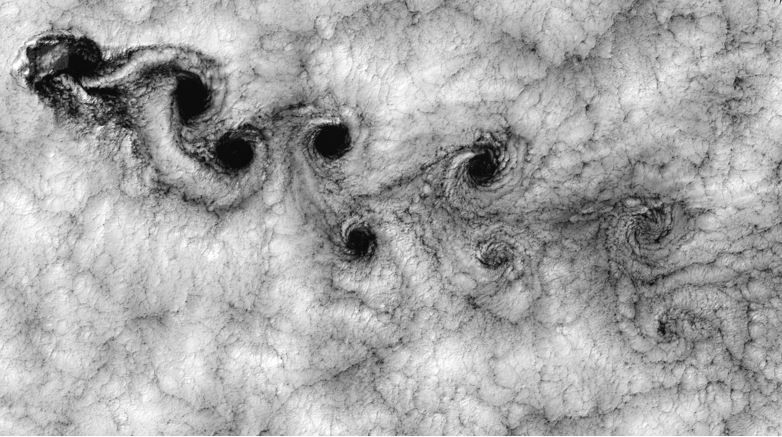