During the ongoing Pyeongchang winter Olympics, there was a lot of talk about the Nigerian Bobsleigh team, often referring to the movie "Rasta Rocket" and the exploits of the Jamaican team at the Calgary 88 Olympics. On this occasion, film excerpts were streamed, including training scenes highlighting key factors of bobsleigh: pushing, boarding, piloting and coordination.

Coordination, among key factors at bobsleigh.

Coordination in turns is evidently a key element of piloting: as it is for motorcycle, leaning in the turns enhances stability and eases the steering. Thus, the reason is also for many ... aerodynamic. And to visualize the phenomenon, nothing compares with computational fluid dynamics often monikered CFD.

Let's take a team of proud and brave Extians, Bob, Fabien, Steven and Justine, whose ambition is to shine at the next winter Olympics in Milan in 2026. 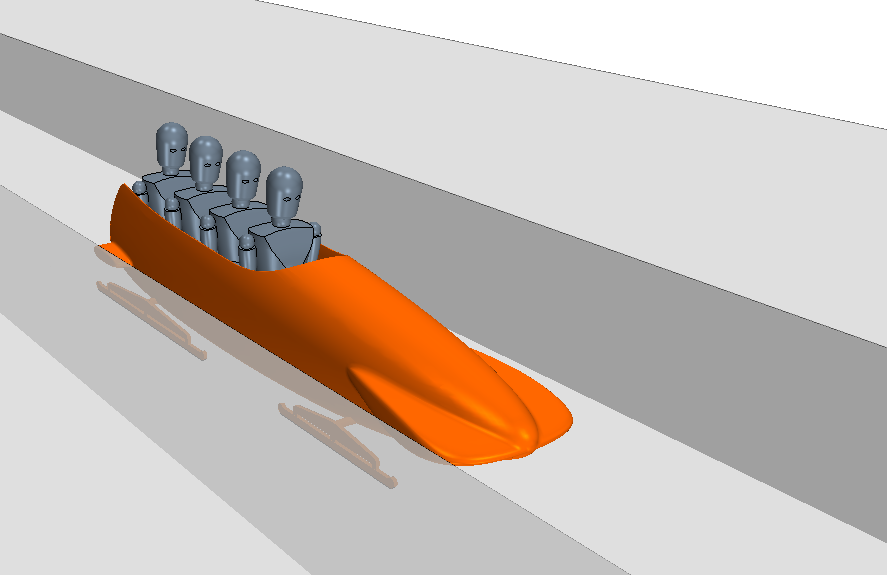 First who? Four daredevils. Then what? The Olympics!

After learning the basics of riding, they throw themselves headfirst into their first descent, and here they are already launched at 130 km/h. At this speed, usually reached by professional bobsledders, the aerodynamic efforts are huge, and the slightest gain is immediately turned into hundredths of a second gained on the stopwatch.

At 130 km/h, the team aerodynamics is paramount.

For their first descent, our proud Extians did rather well, but there is still room for improvement. Indeed, the initial position of the crew has two adverse impacts:

All heads out, the frontal area (the one facing the flow) is far too large to hope to make a good time. The air presses directly on our athletes and slows them down considerably. 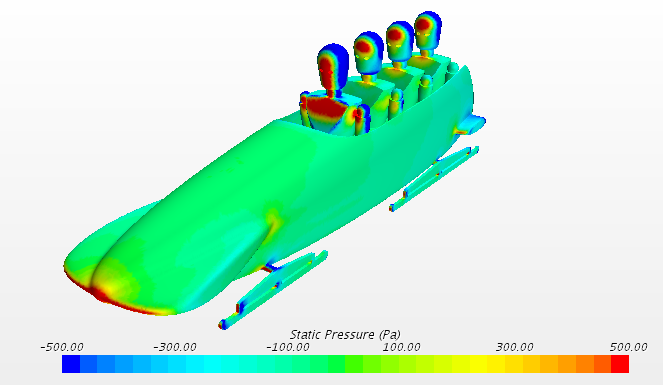 The pressure field allows to spot the areas where the air presses on objects. Areas in red on the picture are the main responsible for the bobsleigh to slow down.

By being so far apart from one another, recirculation zones (areas where the air is strongly slowed down) appear between athletes. These zones also contribute to the slowing down of our crew.

Velocity map herein allows to illustrate the object impact on the flow. Roughly speaking, if the air slows down (blue zone), it penalizes the progress of the vehicle.

**The aerodynamic performance of an object is computed thanks to the air penetration coefficient: the famous Cx.**This coefficient allows to compare several simulations since the lower it is, the better the vehicle aerodynamism. In the present situation, our crew Cx is of Cx=0.49, that is less performant than a monospace…

Based on this experience, our valiant athletes set off again from the top of the track, but this time willing to improve their approach by all leaning forward during the descent. Once again, they managed to reach 130 km/h, in much better conditions, nonetheless. Changing the position of the pilots reduces the frontal area and the recirculation between the pilots. The aerodynamics of our team is greatly improved, and the Cx now drops to 0.39! 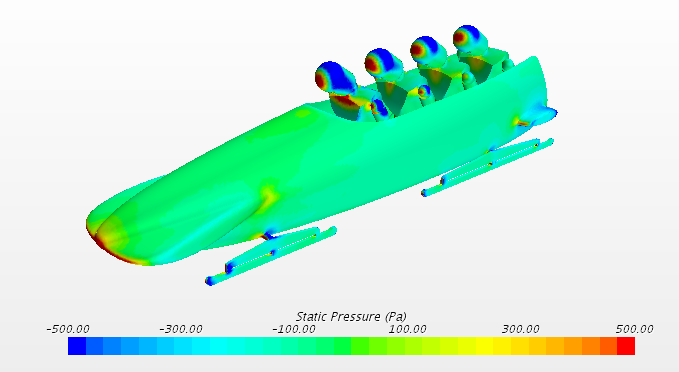 Heads down, the exposed surface is lessened area and therefore the air pressure is decreased.

By moving closer from one another, the recirculation areas are less important and slow down the vehicle less.

After several attempts to enhance their technique, but without really succeeding in improving their time, the group decides to call upon Mehdi, the aerodynamic expert of the Extia CFD design office who previously worked in motorsports, notably on Sébastien Loeb's car.

He decides to tackle the problem from a new angle. Instead of working on the positioning of the team, he decides to modify their bobsleigh. His intuition is the following: if the air slows them down when they are at full speed and if the vacuum between them is responsible for slowing them down, then why not deflect the air to prevent it from entering the bobsleigh. So, he builds a small deflector and set it right in front of Bob, and our team takes off down the track one more time. Once again, they reach 130 km/h but with more ease than the first two attempts! Indeed, the addition of the deflector makes it possible to the air to take off above the crew members. The air goes around them slightly more instead of hitting facefront. 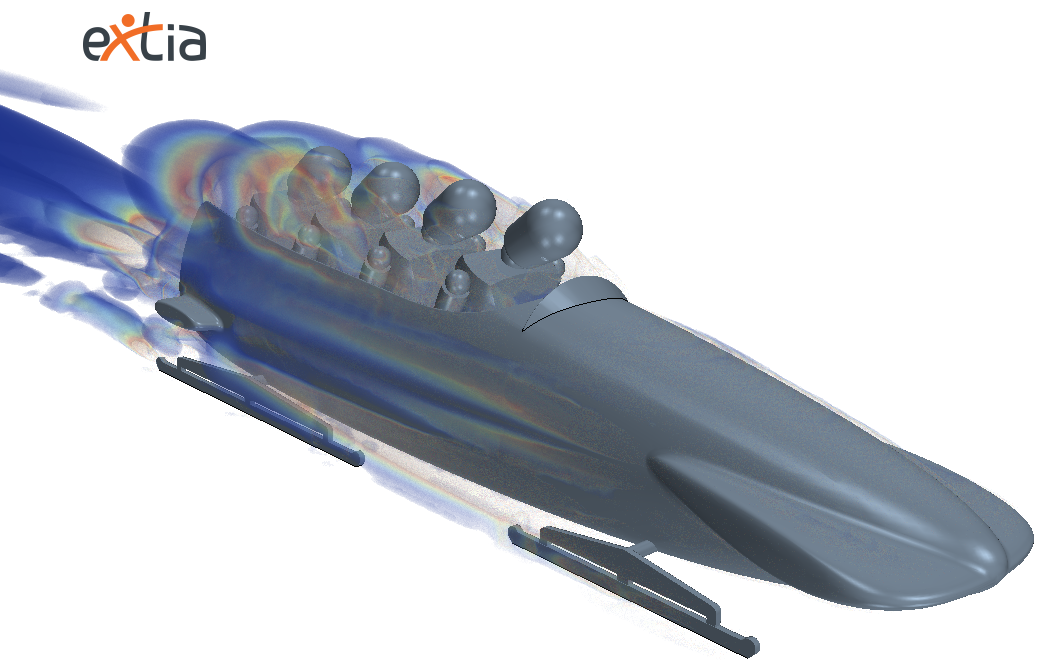 With the deflector, the air goes around the crew more easily.

The pilot is the first beneficiary of this improvement, and the pressure zone that was present on his chest has disappeared. The aerodynamic efficiency of the vehicle has improved to Cx=0.38, although an obstacle in the airflow was added. 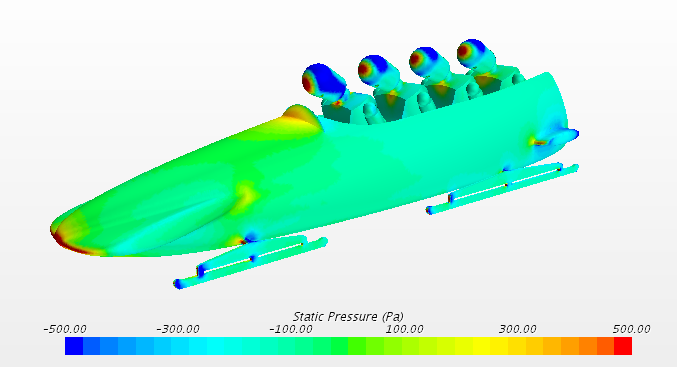 Due to the new deflector, the air pressure on the members is decreased especially around the upper part of their bust.

By adding the deflector, the recirculation inside the bobsleigh (blue zones in between members) tends to be diminished.

The positioning of the riders, and their alignment during the run is therefore a very important element for the bobsledders. Throwing back to the famous scene of Rasta Rocket, if the Jamaicans train so hard on their team coordination, it is owed to the alignment of the athletes playing a big role from an aerodynamic point of view. More than ever, the saying "not a head sticking out" is key.

For our Extian friends, on the other hand, the prospect of a medal on the Milan track is still a long way off. However, they seem to be on the right track if we look at the athletes of the last Olympics: positioning and front end of the bobsleigh are definitely important factors. 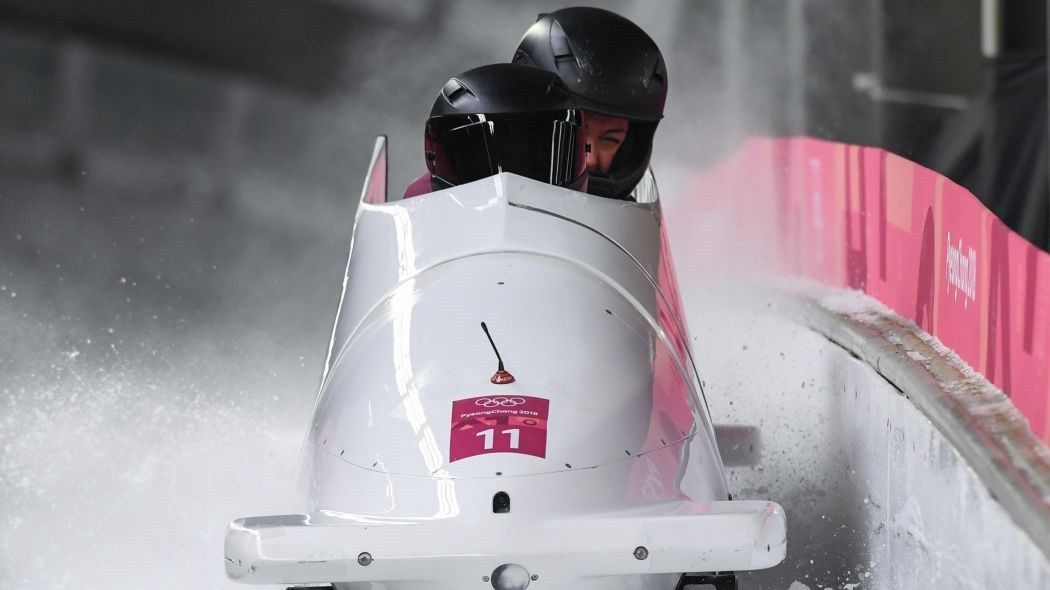 Although more subtle and aerodynamic than Extia's, the deflector at the front of the bobsled is still noticeable. Again, the air is redirected upwards to lift it above the crew and limit recirculation in the vehicle. 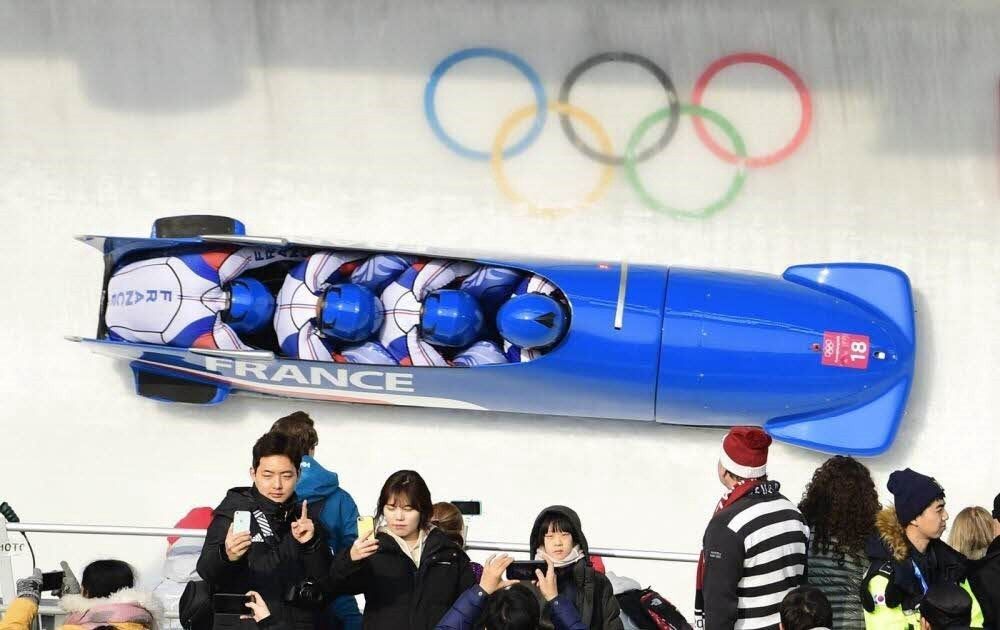 The position of the crew is fundamental: lowering the head fosters air penetration, while staying tight together and closing gaps limits air recirculation zones. The position of the last crew member is special: by rounding the back, it reduces the impact of aerodynamic drag at the bobsleigh rear.

Created in 2014, our CFD design office is specialized in the treatment and the numerical calculation applied to fluid mechanics. Discover our center of expertise right here: CFD design office.

An introduction to business agility

Use it Again! logbook - Episode 4